The Aftermath of Cesarean Birth Nobody Talks About

Although nowadays it is quite a common practice for pregnant women to undergo a cesarean birth, going under surgery is still a risk and the after effects can be quite a long and arduous process. I can’t understand the hype and pressure doctors and women put on new mothers, insisting on a “natural” birth to the point where moms who undergo the knife are accused of not being “real moms” (seriously, you all need to get a life instead of accusing other people). Anyway, I’ve recently gone through my third (and final) cesarean, so just wanna share with you the stuff people don’t really talk about when it comes to going under the knife. Although this is a lighthearted piece, remember, cesarean section is definitely NOT an easier way out of natural birth.

People forget that cesarean means surgery, which obviously means going under the knife. Someone will be cutting you open, dig around and extract the baby, then patching you back up. And if you think it isn’t going to be painful, you must be dreaming. On top of that, with each c-sect, the pain increases.

After my first c-sect, I could walk the next day (I was also younger then -lah). My second c-sect was 7 years later; granted the time frame was quite far apart, but after my second c-sect, it took me 1.5 days to be able to walk. However, this time, on my third c-sect, which was 2.5 years after the second, even after 5 days, I am still struggling to walk and get out of a sitting position. In fact, the pain was so excruciating that I had to take 2 morphine shots and tramadol on top of my regular paracetamol + celebrex painkillers. The pain seriously SUCKS.

When you have surgery, you obviously can’t go to the toilet after. So what happens is that once you’ve been given anesthetic, a urinary catheter is inserted in your *ahem* pee-hole. This drains your urine so you won’t need to empty your bladder after surgery.. well, since it will be too painful to move yet.

In my case, the tube was taken out the day after surgery, which obviously means I have to endure the pain walking a mere 1 meter away to the toilet. That is one problem already. An even more annoying problem is infection. Some may or may not get it, but there are times when you will get Urinary Tract Infection (UTI) a few days after… and this is seriously a very irritating infection. It isn’t icky or anything, but peeing gives you an annoying burning sensation. 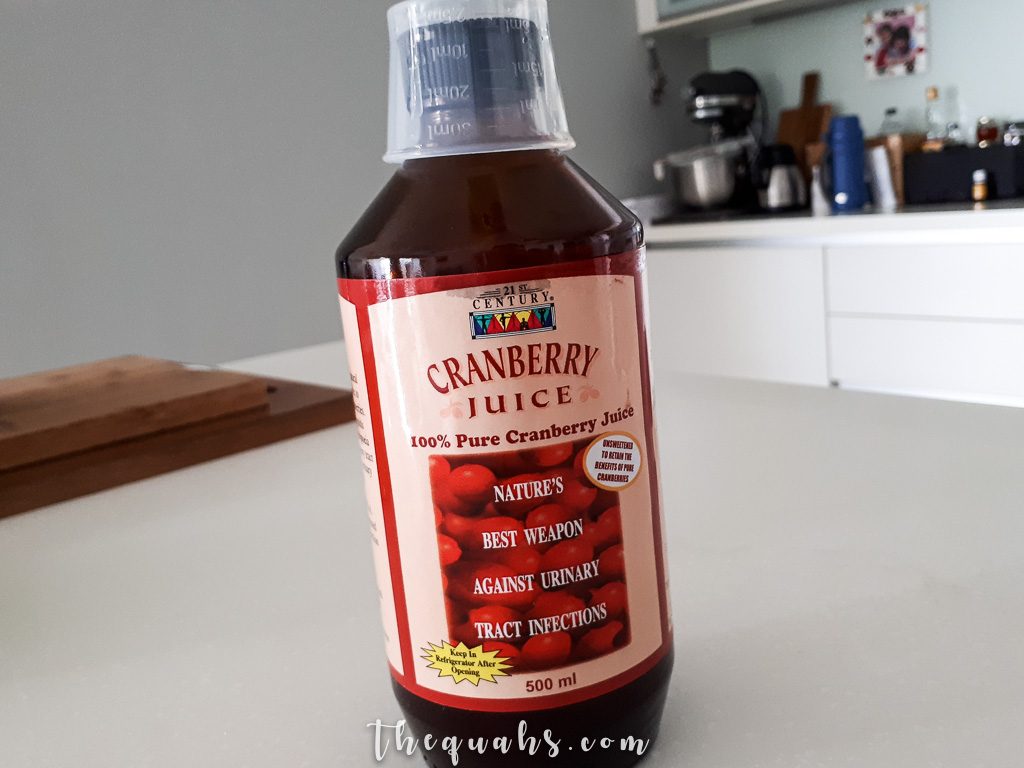 So remember to stock up on cranberry juice to clear UTI before a surgery. Currently I’m taking one that is pharmacy-grade; not one of those cranberry beverages you drink for leisure. Also, make sure you keep your sutures extremely clean and dry, and don’t aggravate it. You really don’t want your stitches to get infected since it will be an even longer road to recovery.

If you think you can be on the road to losing all that pregnancy fat with exercises and whatnots, you better reschedule your gym appointments. It will be a while before you can walk fast enough to rush to your newborn’s side as you will be walking and doing most movements in sloth-mode. Every sudden move will hurt; even standing up straight is a test of your pain threshold. Getting out of bed, and even out of your comfortable couch is not an easy task – you definitely need to grab hold of all sort of things just to get out without hurting too much. (Did you know you use a lot of your stomach muscles?)

The scar before stitch removal

You will obviously have a scar from the surgery, that’s for sure. Sure, it will be at your bikini line, so you can still wear bikini if you want to, but honestly, it looks really ugly. If you have a problem with keloids, the scar will look worse – kind of like a red, angry, legless centipede. Maybe the first scar won’t look as bad, but unless you request your surgeon to shave off the keloids from old scar, your third c-sect scar will be pretty obvious.

No matter what, the scar is ugly especially during the healing period.. honestly it looks upsetting i have to admit. It gets better later on, but still….

I’m sure you have heard of people having more than 3 kids aka 3 c-sects. Well, technically they still can, but the limit should only be 3 c-sects. Why? According to my doctor (and a few others), the reason is that by the third incision, the area of incision is already weak with a lot of scar tissue. You can have another surgery but by the fourth, the risk is much higher compared to the third and you will be asked to reconsider natural birth if possible.

So, if you’re REALLY not planning to have a fourth child, maybe you could just do a tubal ligation as a form of contraceptive albeit a super permanent one (Well, you still can have IVF babies if you change your mind). 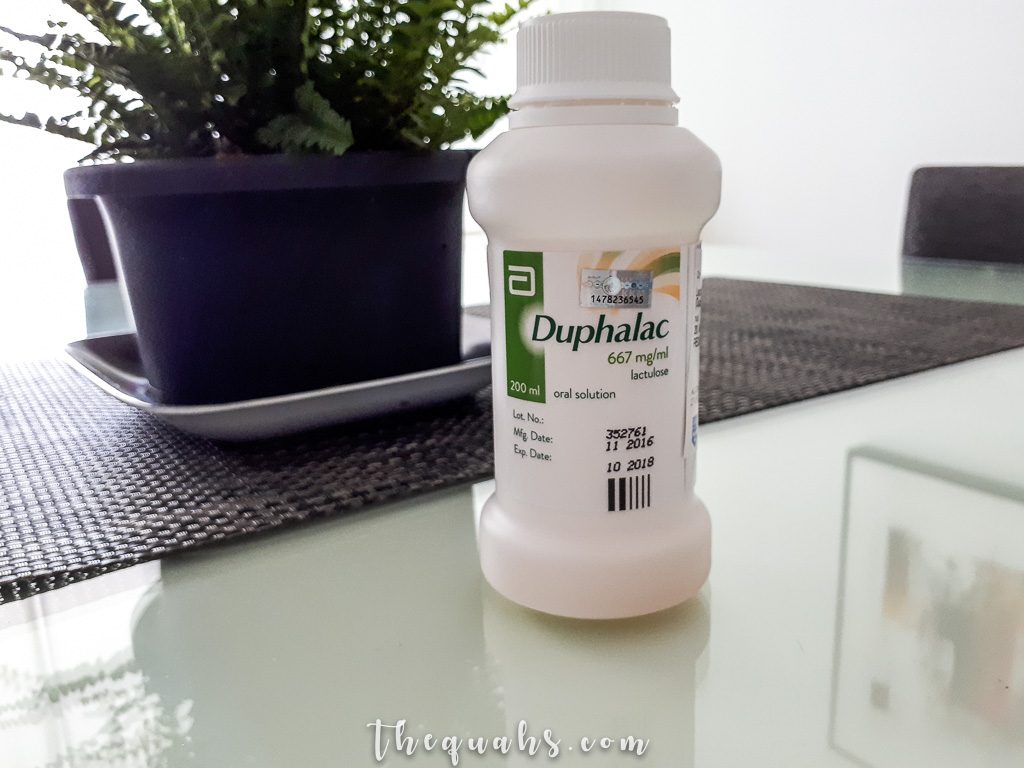 Since you would’ve sutures on your bikini line, and obviously it hurts. Going to toilet to *ahem* poop is going to be a pain, literally. So, when you’re discharged from the hospital, make sure your doctor prescribes some liquid laxatives to help with waste disposal. You still might get haemorrhoids, but at least it won’t be as bad, and could be avoided.

Reaching to all your hidden areas when you’re still stiff from surgery and pains from sutures can be quite a challenge as well, so try to install a bidet to give yourself a nice “shower” even in the innermost crevices to ensure you don’t stay dirty and catch some secondary infection.

I was quite boggled to why I keep having a lower back pain and butt muscle pains, even after 5 days post-surgery. Apparently, the anesthetic you receive on your spine kinda bruise that area a little, so the surrounding area around that point will kinda hurt for  a while. Do prepare a bunch of pillows for leaning and resting in case. 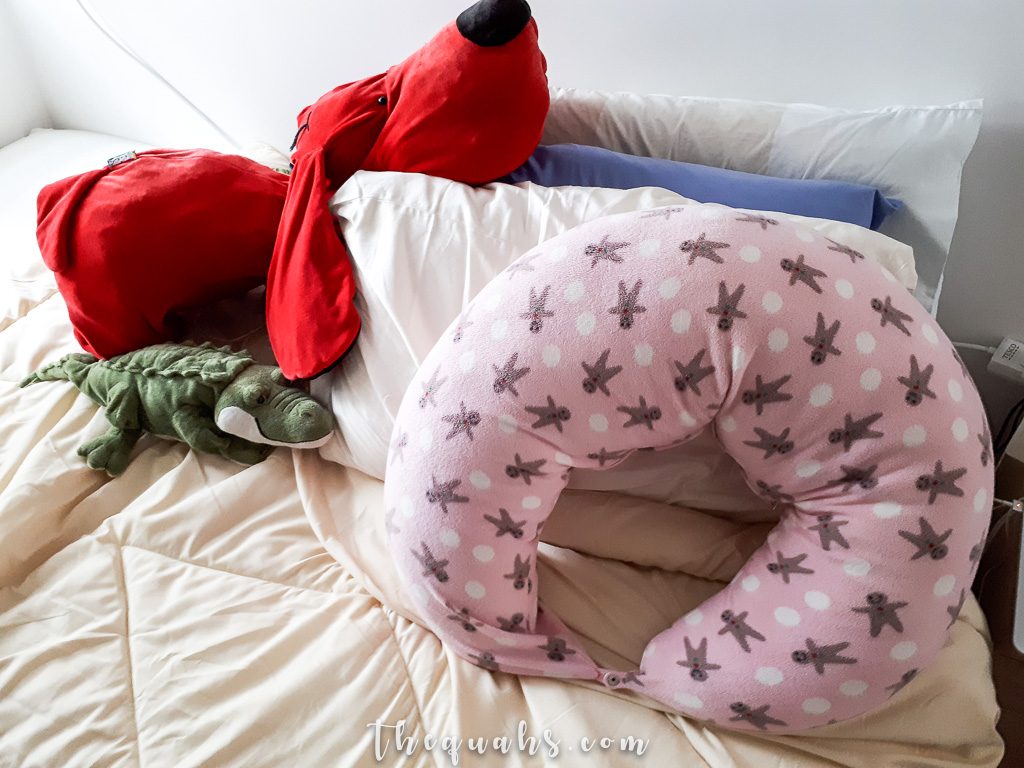 The more, the merrier

I have 3 pillows, 1 donut nursing pillow, Patrick the dog and a soft toy to help fill the empty nooks and crevice when I am sitting, breastfeeding, or just leaning back. Getting up from a leaning-back position is also painful so the pillows kind of help so you won’t get buried into the couch or bed.

I also realized that if I stand too much or walk too fast, my side muscles (around the rib cage area), tend to get sore; as if I have run a marathon. So, back to sloth walk it is…

#8: Sneezing and coughing is like getting punched in the tummy

I know this sounds like common sense, but seriously, this is quite painful and not to be reckon with. The slightest cough hurts and a sneeze really feels like you’re getting a hard hit in the gut. I literally have to hold on to my stitches or kinda press it down so it doesn’t hurt so much. Not sure if it is placebo or if it really works, but at that point of time, anything goes.

So, what other things did you go through during your cesarean? So far, there are what I remember most recently although not every cesarean recovery is the same, you probably would go hit at least 1/3 of this list. Just hang in there, and you will get back on your feet soon though it can feel like forever!