The ups and downs of our childhood leukemia journey so far 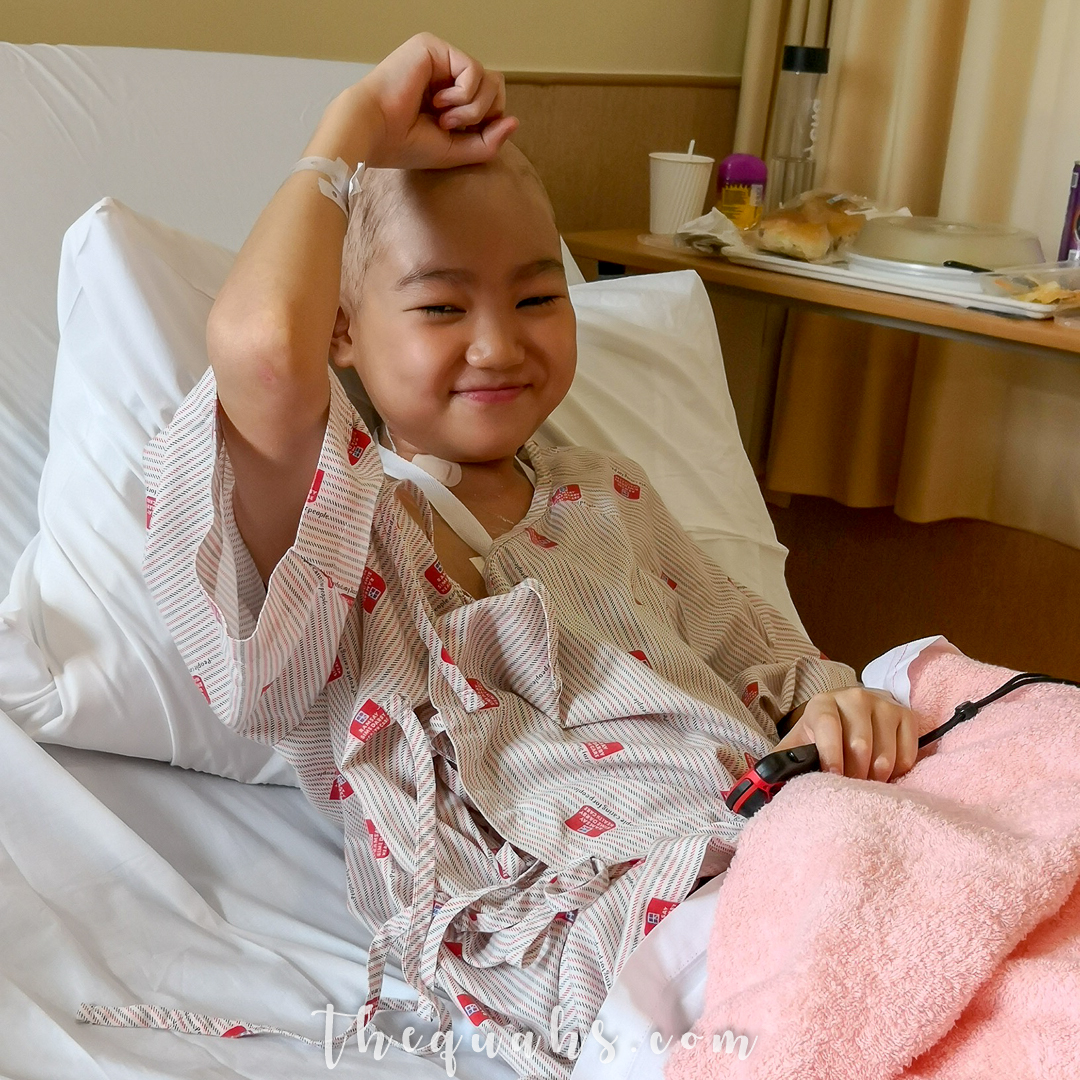 I know it has been a while since I’ve blogged about this, but I guess it is kinda hard to find time to put everything down in words. I’ve had lots of people asking how am I holding up. Honestly, I don’t know. There are days when everything seemed OK, when #theSmally was in good spirits, and almost as if he was all healthy again. And then there are days when we had to watch him vomit for days to the point where only foam comes out, and nothing can go in; not even a sip of water.

There are lot of things we ask for, hope for, pray for, and at the moment, there is nothing we can do other than be supportive even when broken, strong even when weeping inside, and just trust his doctor and leave everything in God’s hands. We know some people have it harder, so I would like to continue sharing our journey in hopes that someone out there will find it helpful and hopeful even in the face of such despair. 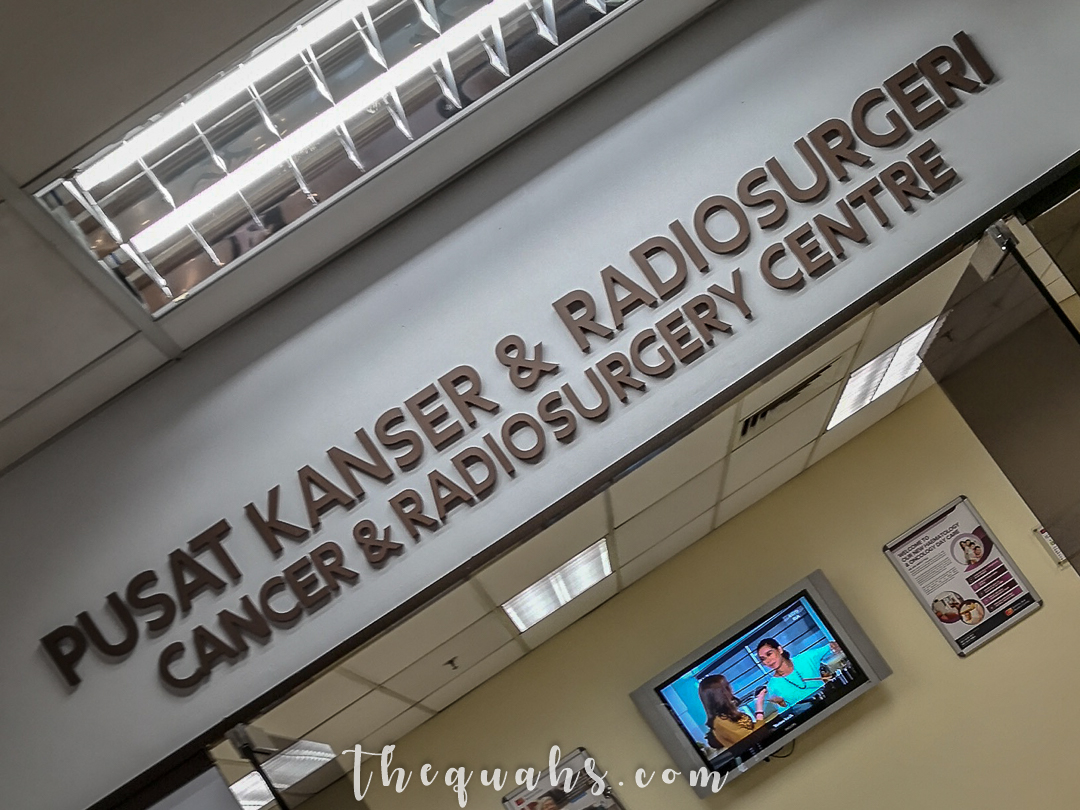 At the moment, #theSmally is going through the third protocol/phase of Intermediate Risk Group ALL treatment at SJMC, under Pediatric Hematologist/Oncologist Dr Chan Lee Lee.

After his first MRD bone marrow test (to determine if his leukemia has gone into remission or not), the MRD results was POSITIVE which is actually not a good thing. This means that under the high-powered microscope, they can still see leukemia cells together with other normal blood cells. However, he is still on Intermediate Risk Group until the doctor says otherwise. His other blood cell levels are good though, so still praying and hoping that the latest MRD results just taken a few days ago comes back with a nice lovely NEGATIVE.

How often are his treatments?

Depending on which protocol he is at. It differs depending on what medication he is taking. I’ve had lots of people asking me why is he taking so many different type of chemotherapy when So-And-So didn’t have to when he/she had cancer. Well, let’s put it this way. Leukemia is kinda different compared to other cancer since this is blood cancer we are talking about. Blood is running through the entire body.. it is not like you can cut out the cancer and just treat that area. On top of that, #theSmally is a child, so he falls under the Pediatric division. 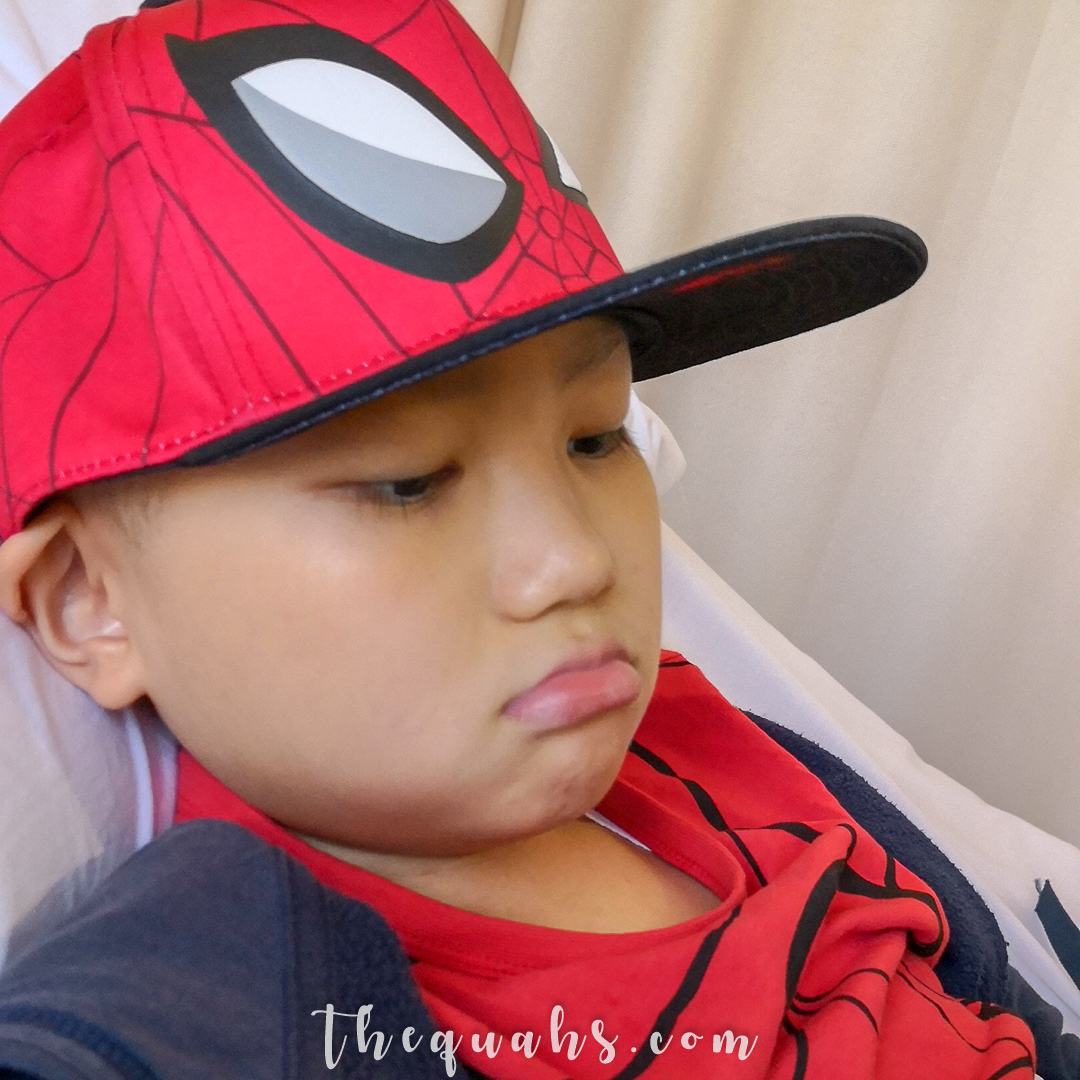 So, #theSmally treatment has a combination of various drugs, depending on his protocol/phase. There are some protocols that are easier, with just a dose of Vincristine into his Hickman line when we visit, and there are some which are horrid, such as getting admitted into hospital to do his Cyclophosphamide drips, or his high dose Methotrexate drips, which makes him nauseous and vomiting for days even with anti-vomiting medication.

Hickman line on the body photo 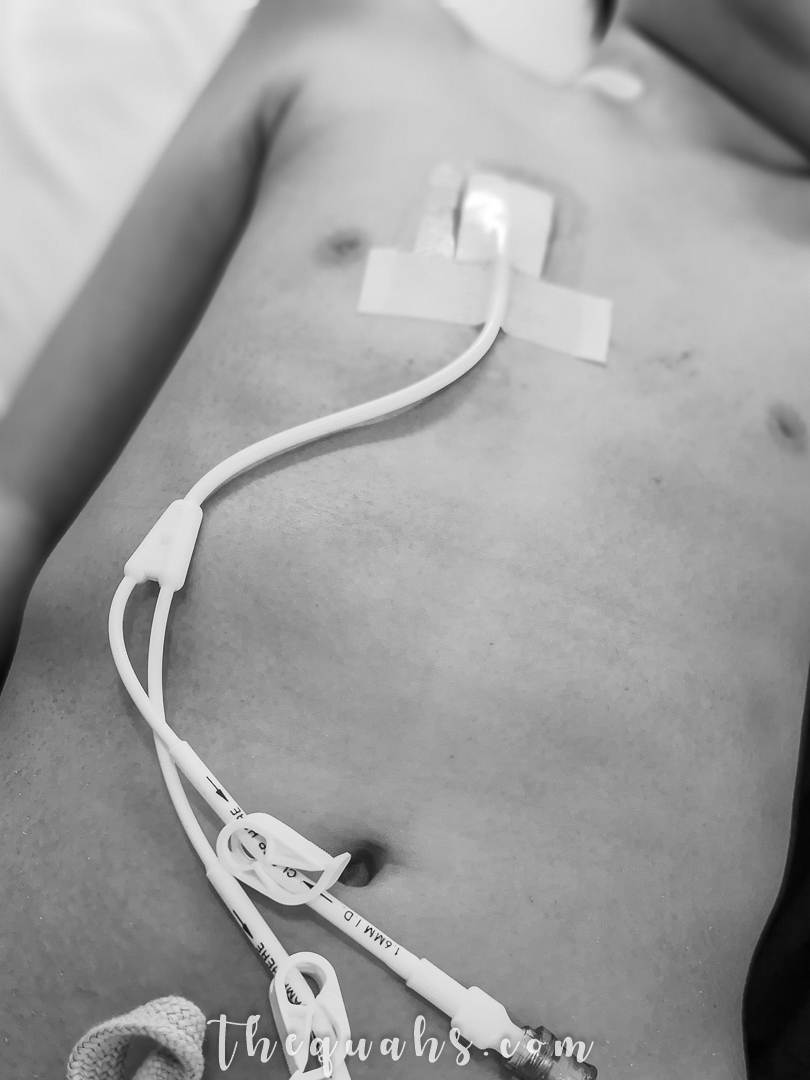 If you do not know how a Hickman line looks like, here it is. Basically, during the first protocol, every single time we visited the hospital for treatment, #theSmally had to get an IV line inserted into his hand. That hurts and is pretty traumatizing. 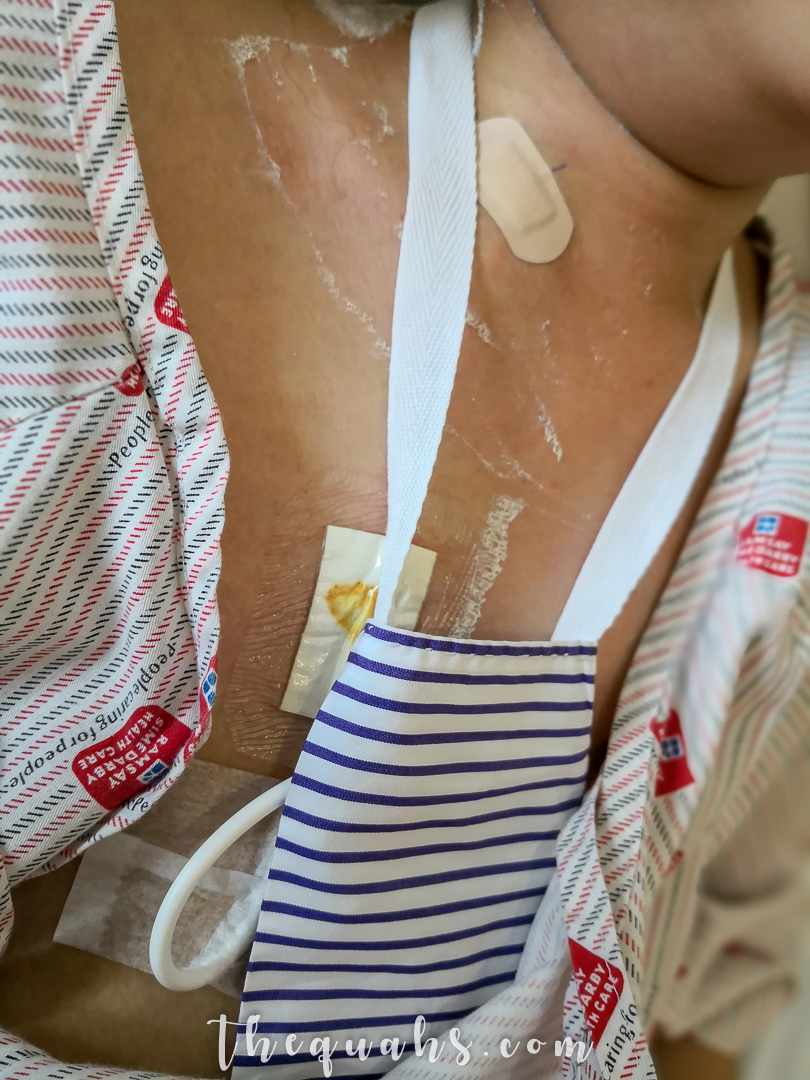 However, just before the second protocol, #theSmally went through a small surgery to insert a catheter on his chest area, under the skin. Surgery only took less than 30 minutes and what happens is that a tube is inserted into a large vein that is close to the heart. That little pouch is called a wiggly bag, and is used to store the dangling parts of the tubes cleanly and neatly.

This is much kinder to kids going through chemo since now the doctor and nurses can draw blood and give any kinds of treatment through the catheter without having to stick a needle in at every visit. The Good: No more needles in the hand at every visit. The Bad: It looks painful. And if not taken care of properly, can get blood infection, which can be very dangerous. 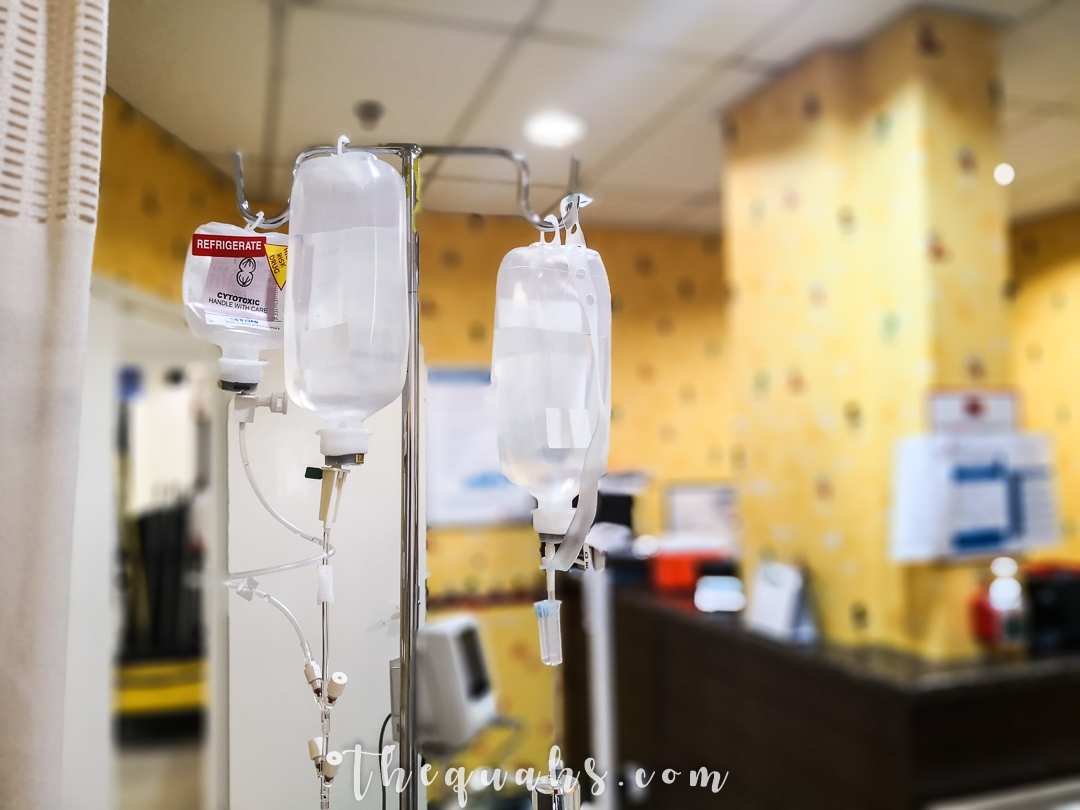 Just after his Hickman Line was inserted, he has to undergo his Cyclophosphamide treatment and at least 3 days of staying in the hospital to ensure he is properly hydrated. 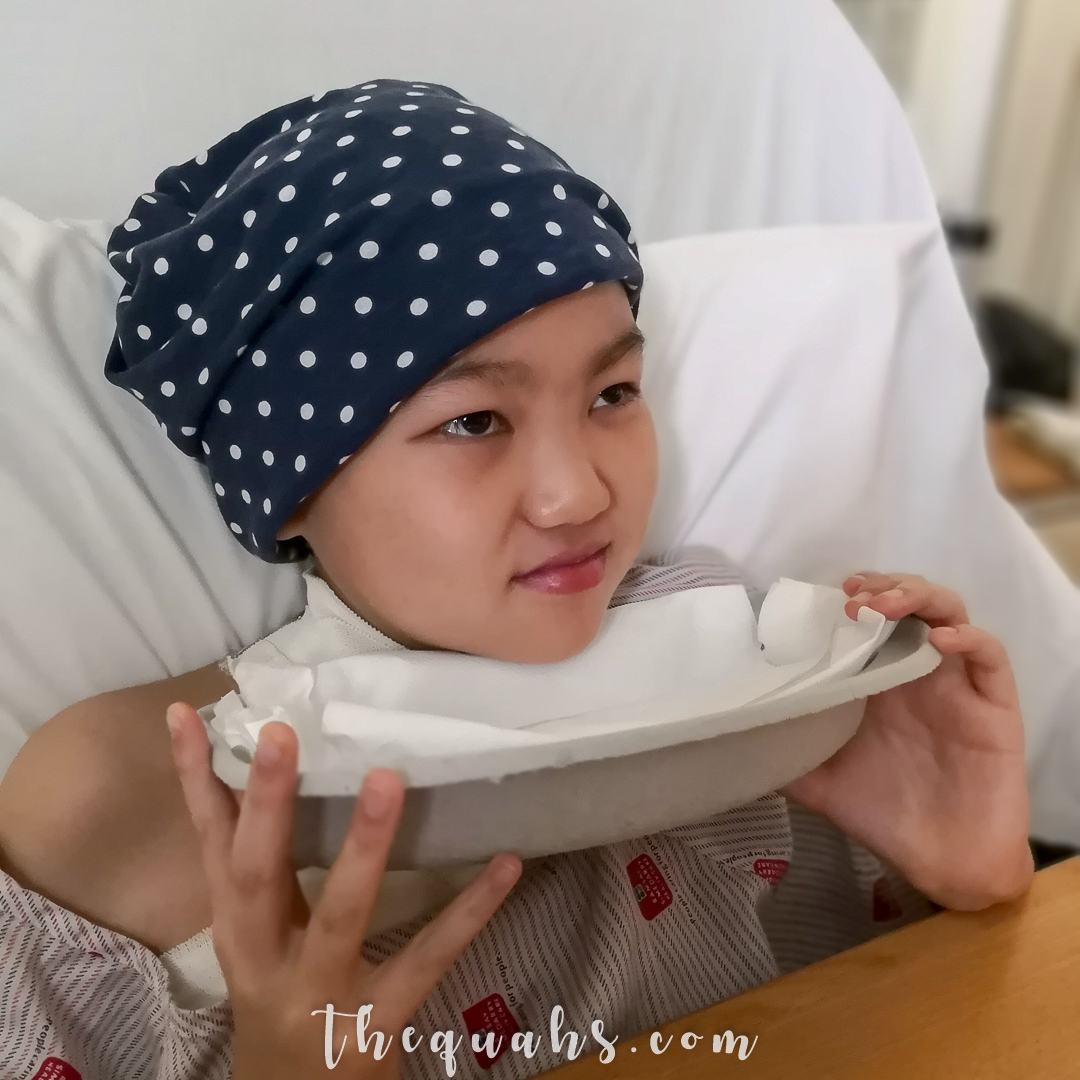 Chemo toxicity is a little high for this, and he vomited for quite a while during his stay. He was smiling because I made a joke btw… not because he enjoys vomiting.  (ؔ❝ ˙̼̮ ؔ❝⁎) 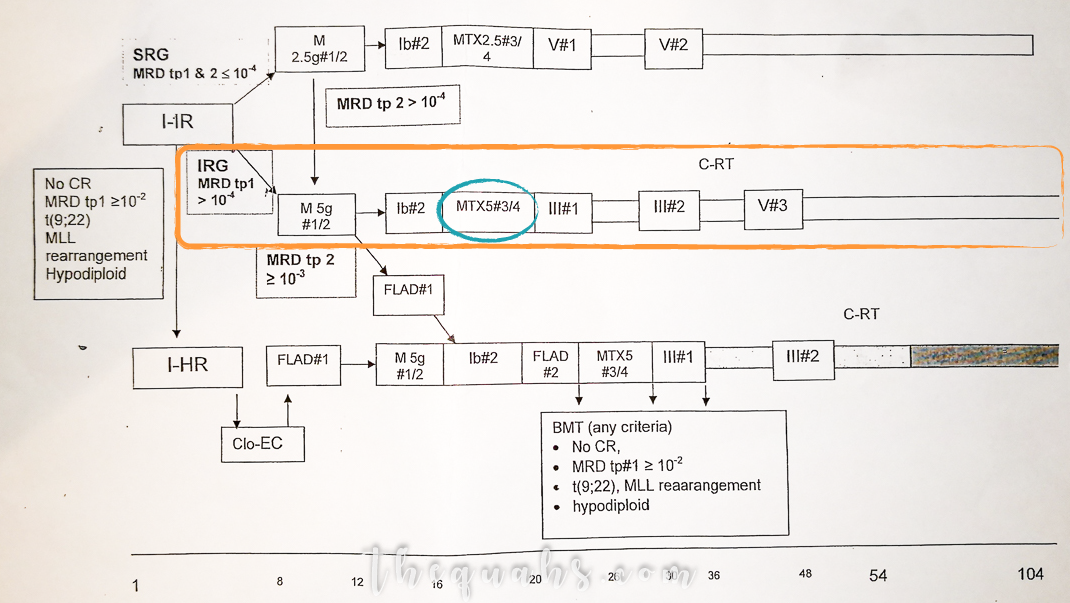 As of now, he is going through the first part of his third protocol called MTX5#3/4, which consists of 2 hospital stays of approximately 3-5 days per treatment, and 2 weeks apart. 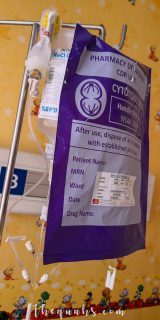 Each treatment comprises of a low and high dose of Methotrexate (MTX) drug, with lots of hydration via IV to flush out the chemical, and at least 1 cycle of Folinic Acid (3x per cycle, 1x every 6 hours) as a “rescue” drug to protect his organs especially kidney and liver. After the rescue drug, his blood is taken and tested to ensure that the MTX levels in his system is lower than 0.2 μM, before he is discharged. 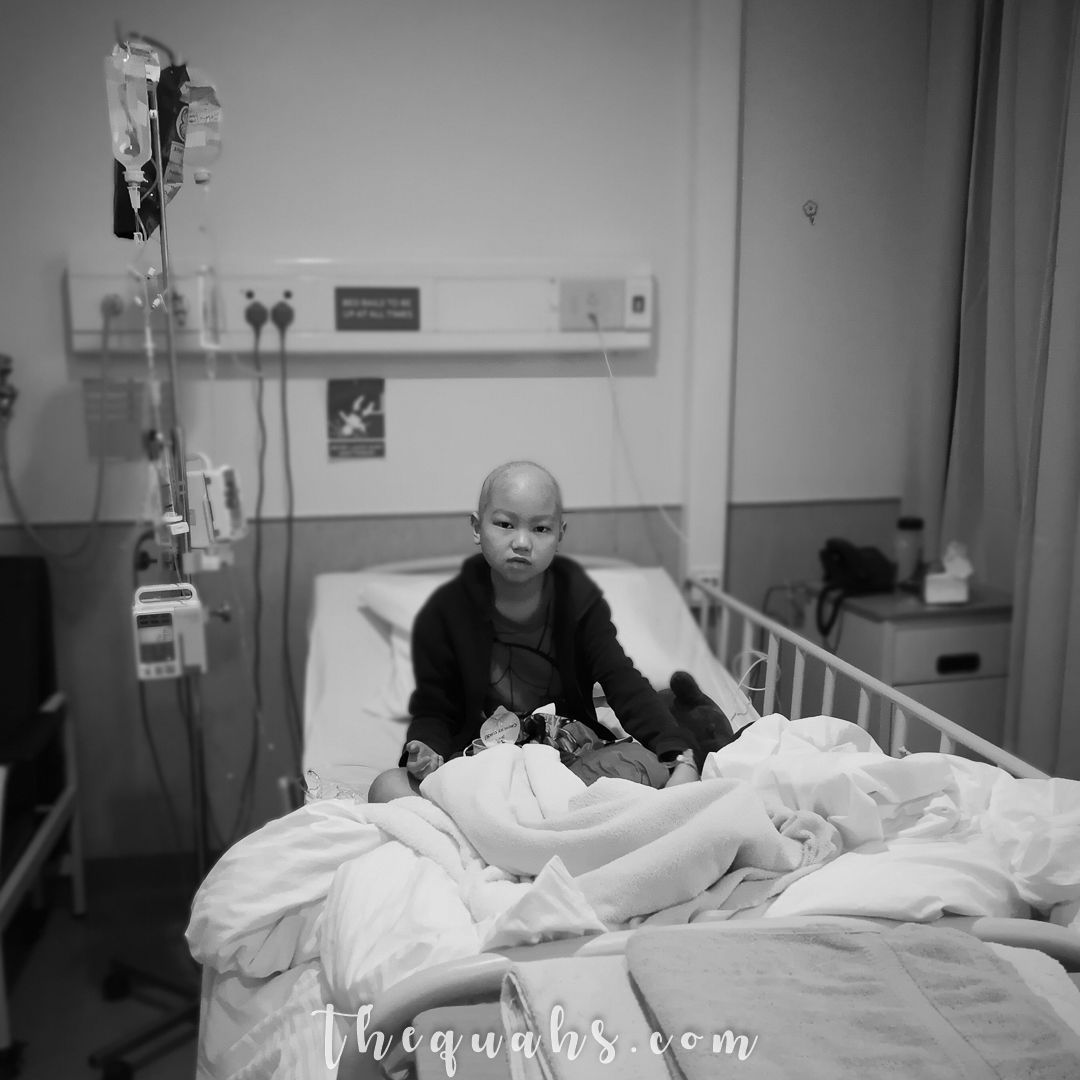 It has been a long stay for us, and somehow he has been vomiting for 4 days now, even after anti-nausea medicines have been given such as Kytril, Zofran, and Maxalon. I guess his body is trying to eject the toxins, and I also suspect there are times when it is psychological because almost every time the nurse or doctor comes in to check on him, he pukes.

Despite all the treatments, all the hospital stays, all the vomiting, life has to go on. We don’t spoil him although we are a little more lenient at times, but he still gets disciplined, he still has rules to follow and chores to complete. 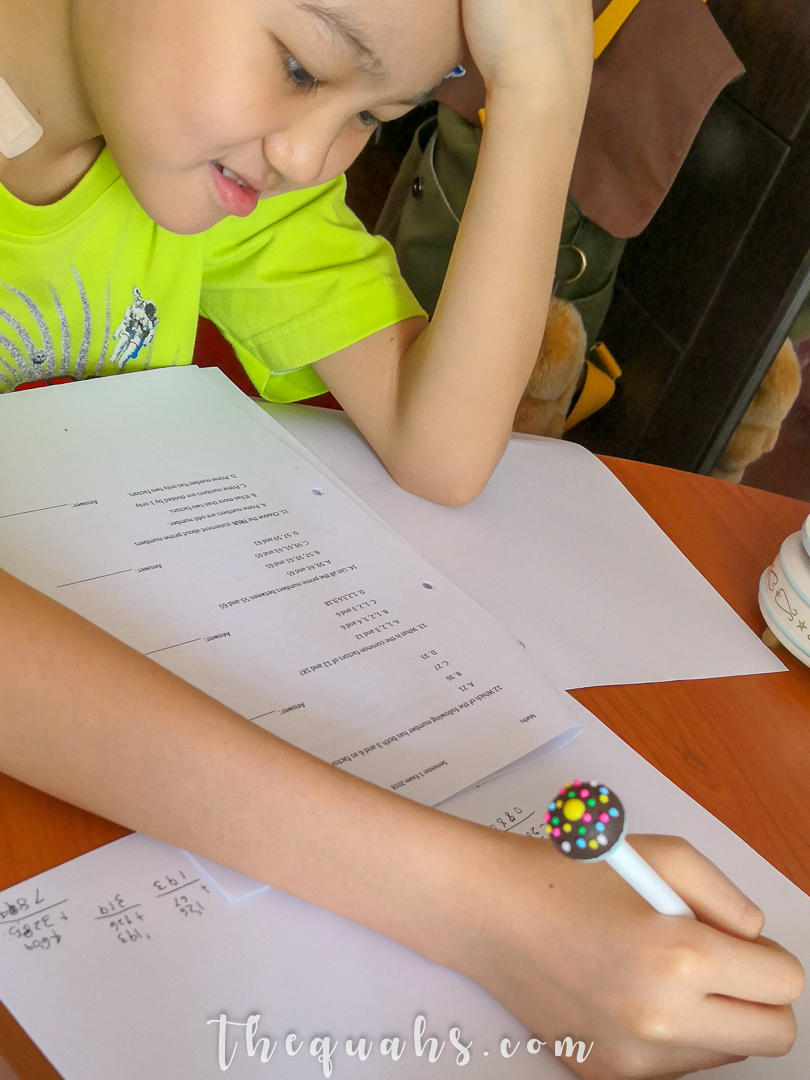 Currently, he has taken his homeschooling work home and has been doing them at home. Thank God he was already in a homeschooling centre so at least his education is not halted. He still does his work, he still has exams to take. It is just quite taxing to myself and hubby to teach him. The school has been very understanding and nice, so we take his books back to his teacher for corrections and he can take his exams in school too.

Chores is also still part of life. He has to wash his dishes, and do his own laundry. Sometimes he helps out with the younger ones, but of course all these are on good days. If he is feeling sick, of course we won’t force him, but at the same time, we can’t spoil him or it will be harder to go back to his routine later on. 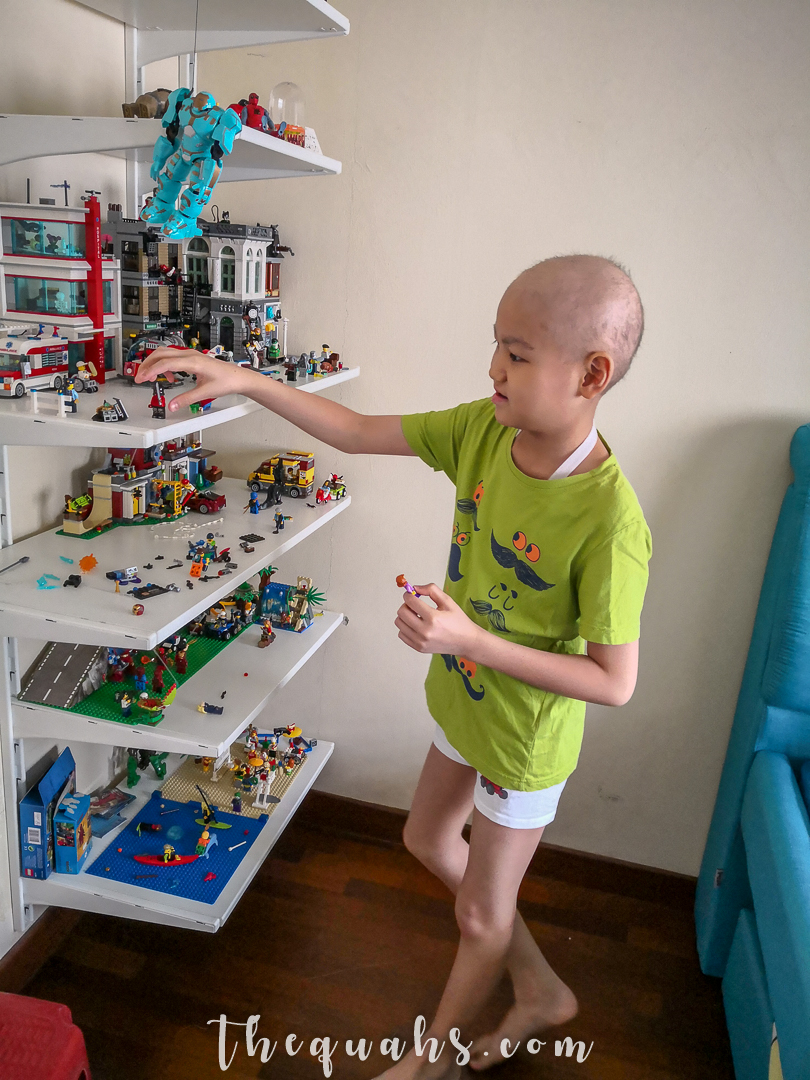 Basically, we are preparing him to go back into society, to go back to his normal lifestyle. His favourite hobby (other than playing computer games) is building his LEGO city of his own in his room. We had to tell him to build a little slower since it is rather expensive to keep buying him sets and sets of LEGO.

How are we coping? 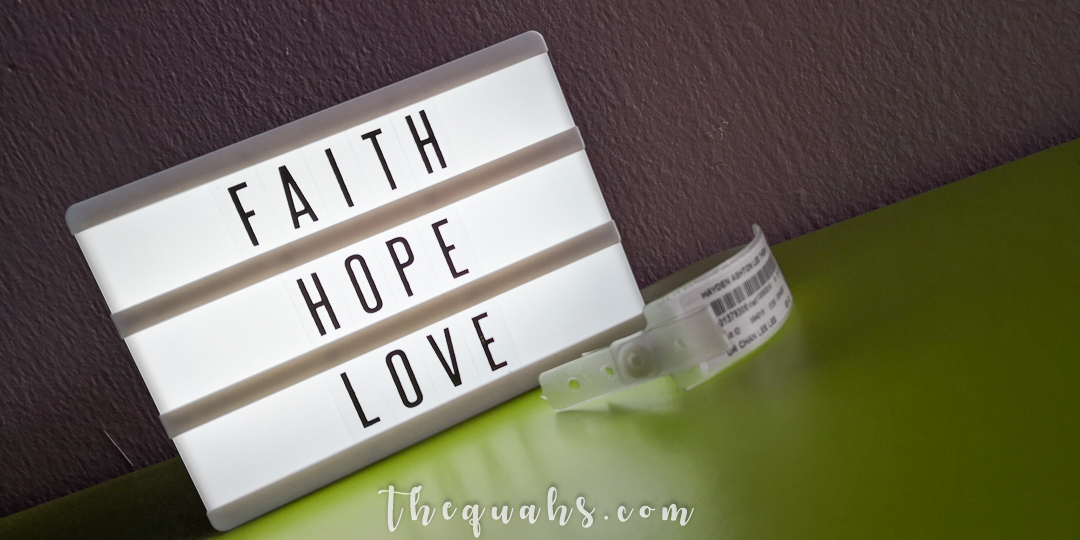 In a nutshell, it is very tiring. Not only is it physically draining, mentally and emotionally too. I suppose at this time, it is very easy to get into fights with the hubs or just get annoyed with everything else around me, but I am thankful that hubby, my family and friends have been quite supportive and understanding. This thing brought us together, but have also driven some of us apart. And to be honest,

I suppose the biggest thing to be thankful for is the support from the church, whether from pastors, cell leaders, cell members and friends. During this trying time, you will need lots of support, which is why some people join support groups. I am generally not comfortable with talking and whining to strangers about this, so I kinda decided to only open up to certain people. Maybe it is the phobia of all those support groups I have joined before that ended up being toxic, so I shied from them.

Will try to update more soon. I am seriously too long-winded sometimes. Sorry for the wall of text. Hahaha. And if I don’t reply your messages or pickup your calls, most likely I am either too busy with a whirlwind of things to do, I missed seeing it, or I am just too tired to entertain or explain. Thanks for understanding!